September to Remember rolls on to 20 years landmark 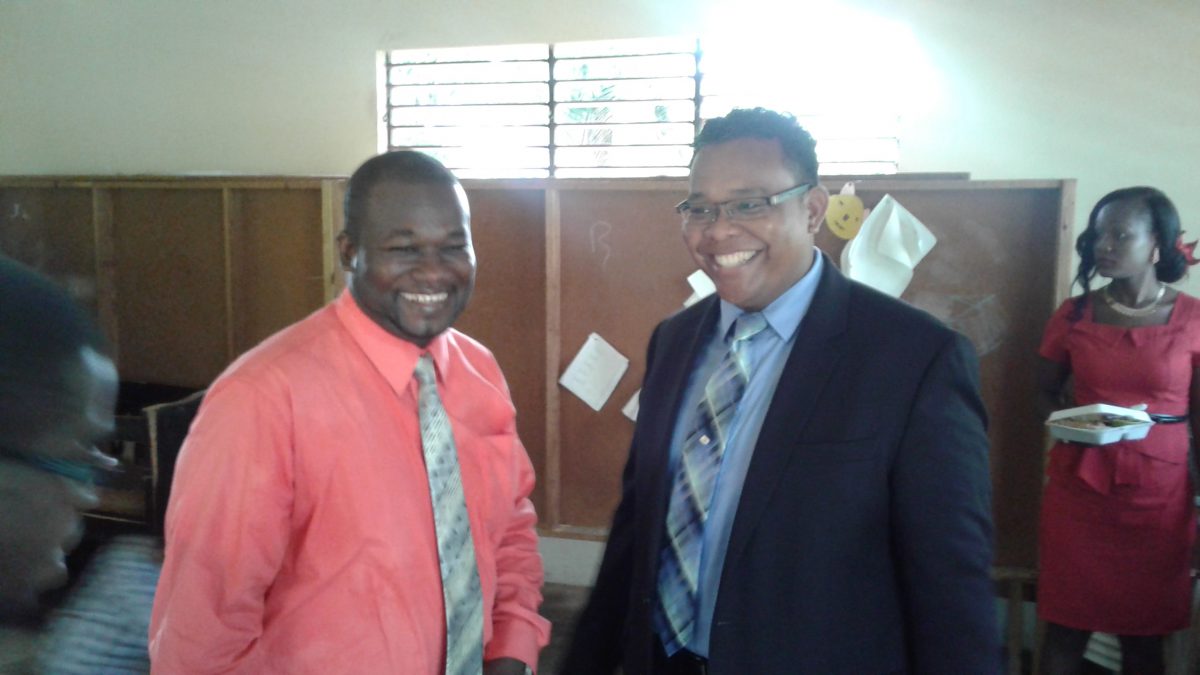 Twenty years ago Bro Edwin Findlay suggested to the leadership of the Moneague congregation to have a Youth Sunday which involved the Youth from the congregation engaged in leading activities as a mentoring programme and ??method at bridging the gap between the aged and young.

Now held every first Sunday in September, it is dubbed “September to Remember“. What then was just conceived to be local to the Moneague congregation has now been a national staple on the Calendar of the Young and young at heart across the island of Jamaica.

Bro Blackford spoke on the topic “Grace, Mercy, and Love“. In his lesson he highlighted Grace is something we could not afford. It’s like his desire for an Audi motor car but on his current salary no financial institution will give him a loan to obtain this. He further explained Grace is given freely. We cannot claim we deserve it because of any work we have done. It is an act of unmerited favor. In comparing to Mercy,??he expressed that Mercy is showing compassion. It can be considered in some cases an act of forgiveness. It’s exercising leniency when one has the power to execute punishment. In needing mercy, one can make a plea for mercy. In examining the final word of his lesson, he shared with the audience that Love is a difficult word and concept to understand that if one should do a Google search of the word, there is an example of one directed to 1 Corinthians 13:4-7. ??He further expounded that the passage clearly expresses Love as an action. Love is embodied in our personality and can be seen in our actions. He expressed Love is seen by how we treat each other (John 13:35)

Rom. 6:23 -We deserve death but love gave us a free gift which was his grace.

Bro Gregory Hay was the second speaker, who spoke on the topic “Perseverance and Faith to endure“. He indicated before coming to Moneague he faced the challenge of his car not starting. Then he had to borrow another car but on his way realized he left his Driver’s licence and had to turn back. If these series of unfortunate events was not enough he missed his turn to Moneague on the Highway and had to extend his journey. With all of this he said He could have given up but he persevered because he believed he had to be here. He highlighted this was fitting for his lesson as we need Faith and perseverance to endure the Christian way of Life. He shared Faith is a strong belief and trust system and that endurance is the ability to put up with pain. “It’s easy to start a marathon but to finish requires endurance. There are many challenges that we will face in this Christian life but we need a strong belief that God is dependable. If we Trust in him [GOD], we will put up with the pain.”

In 2 Tim 4:7 Paul said “I have fought a good fight… I have kept the faith” . It shows Paul had to work to keep the faith. Bro Hay asked the audience a pertinent question “How is our faith keeping?”

Bro Edwin Findlay was the last speaker for the morning session. He spoke on the topic “Believing and Trusting in God’s Word“.

His main text was 2 Tim 3:16, where he highlighted “Anything that comes from God’s word can be trusted. The word of God has the power to thoroughly equipped us in this life and is beneficial to our living”.

He asked the audience “How is it we can trust the doctors, our parents, friends, our relationship partners and teachers but many are hesitant to??trust God’s word which has the power to save us?”

“We don’t need to wait on dreams” he emphasized, “to hear God’s word”. He has already spoken through his Son Jesus Christ (Hebrews 1:1) and has given us everything pertaining to life and godliness (2 Peter 1:3)

Bro. Findlay illustrated that God’s word enable us to endure the spiritual challenges. It’s like the best “Shock absorbers” on a car, allowing us to ride out the potholes in our spiritual journey.

The Morning Session ended for Lunch break where the gathering was treated to a delightful offerings of Soup, Curried Goat, Chicken and the infamous Moneague’s roast??pork.

The Afternoon session began with Congregational Singing after which Bro Damion Lowe was introduced to the gathering. He spoke on the topic “Prayer and Dedication“. ??He examined the situation in the book of Nehemiah where the man of God prayed for an answer, in the face of the King. Bro Lowe reviewed Nehemiah’s desire for the restoration of Jerusalem’s wall and the opposition Nehemiah faced in his efforts to rebuild the walls of the city. He indicated as Christians we??will face negative criticisms??but we should not allow these to throw us off track. We must be determined as Nehemiah to build the wall in the face of opposition. ??We have come this far because of our faith and we must continue.

After his lesson the congregants were engaged in a lively singing inspiration session where they lifted their voice in Praise to God concluding a truly wonderful day in September to Remember. 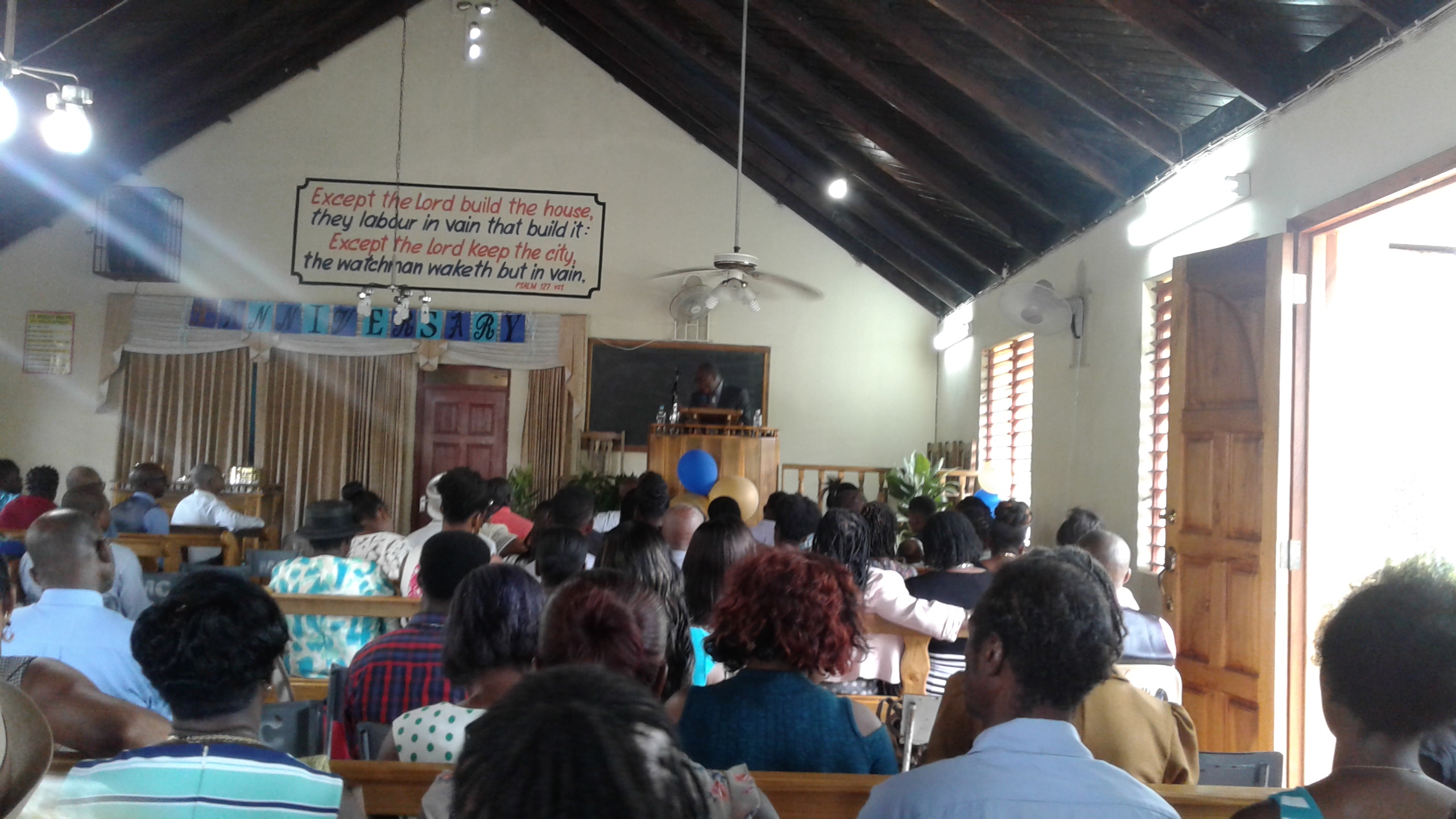 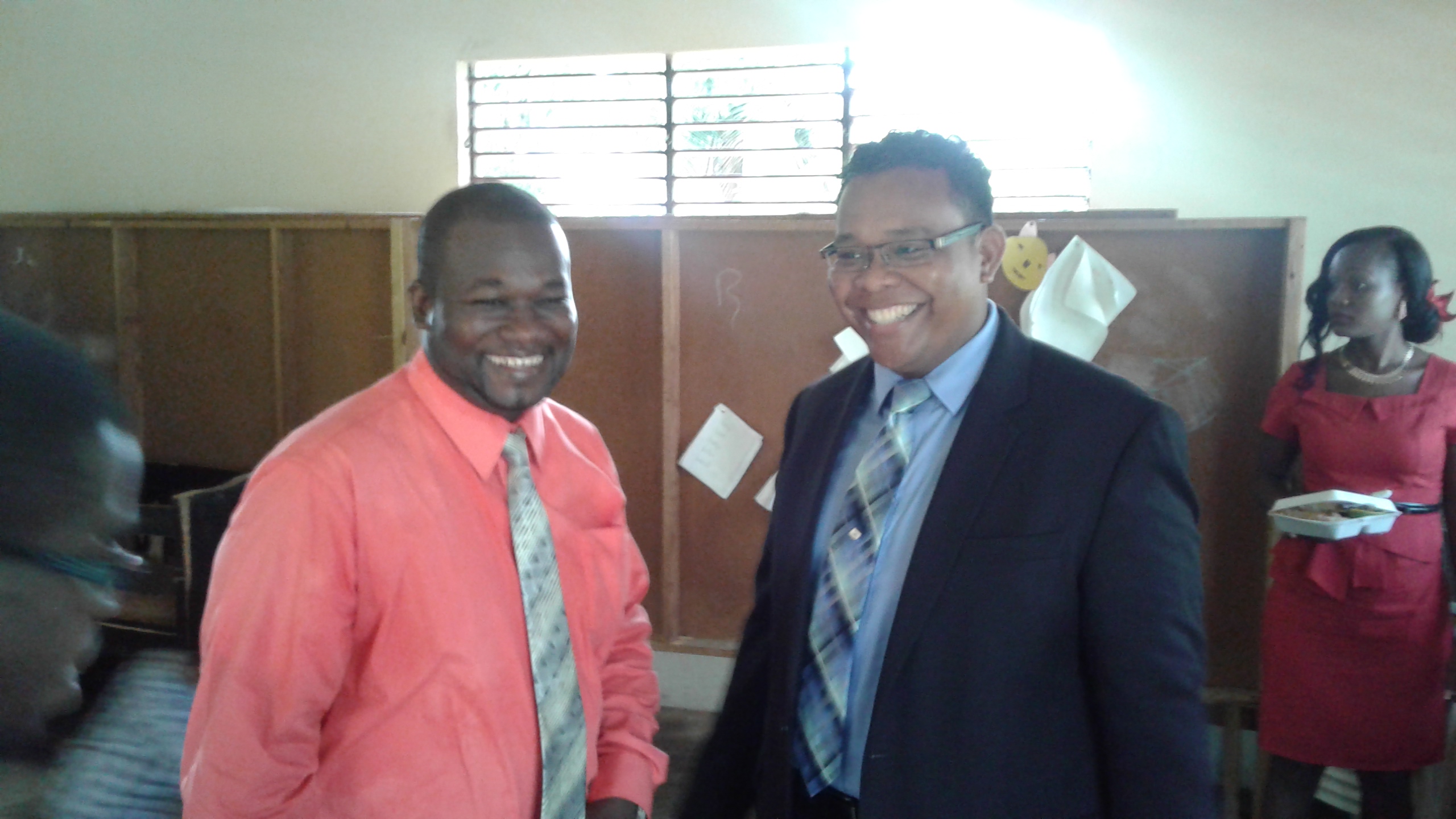 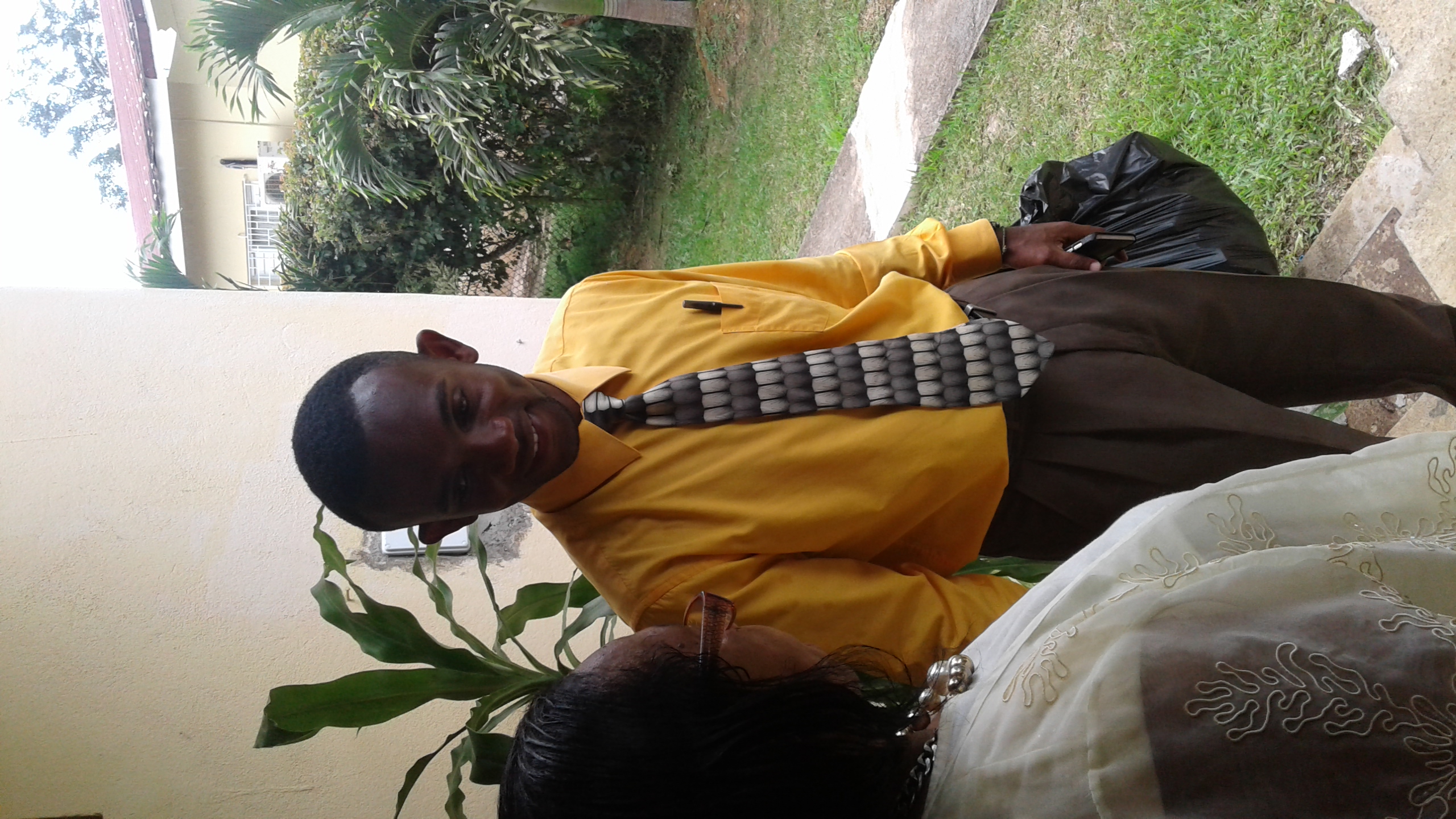 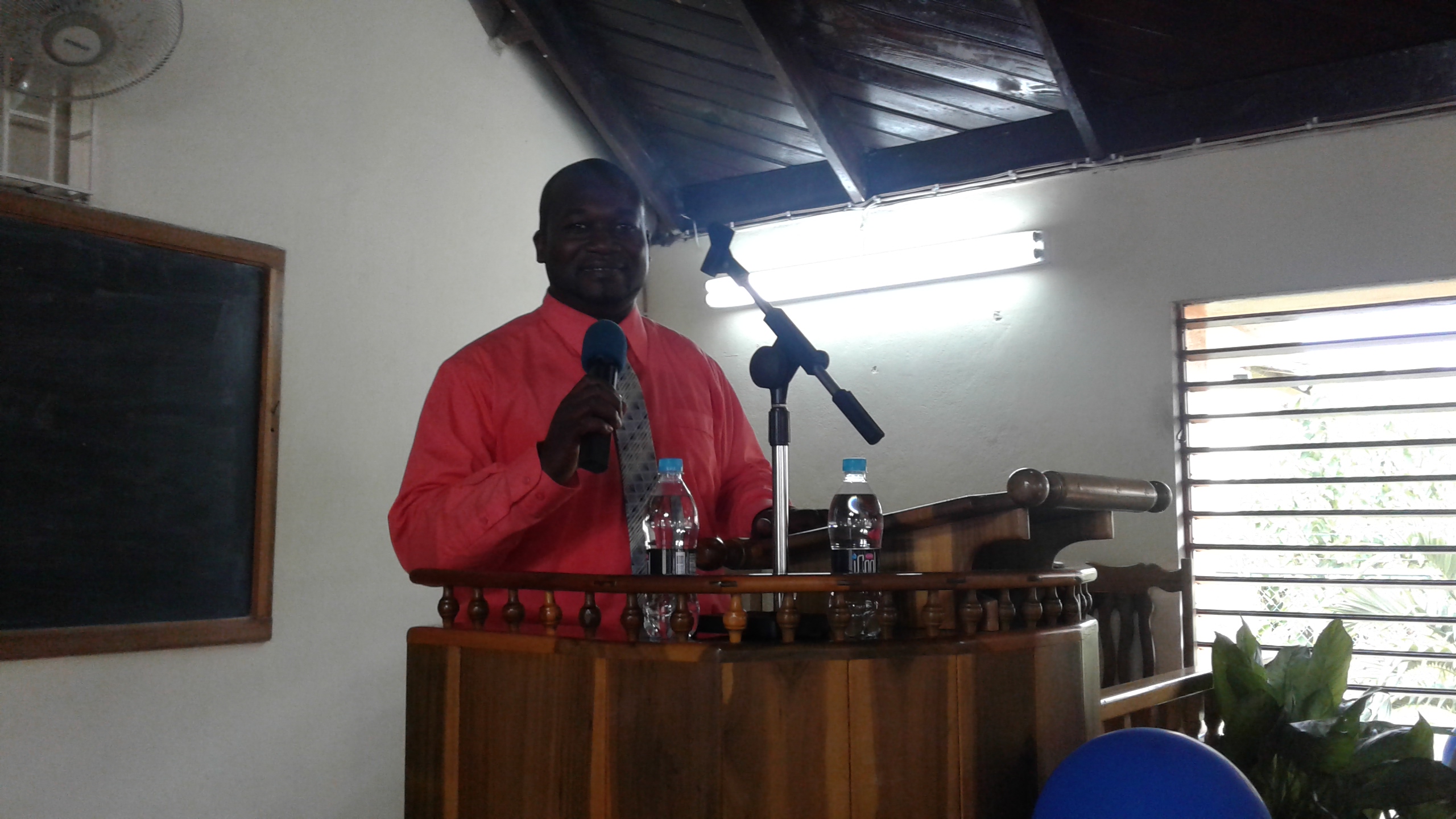 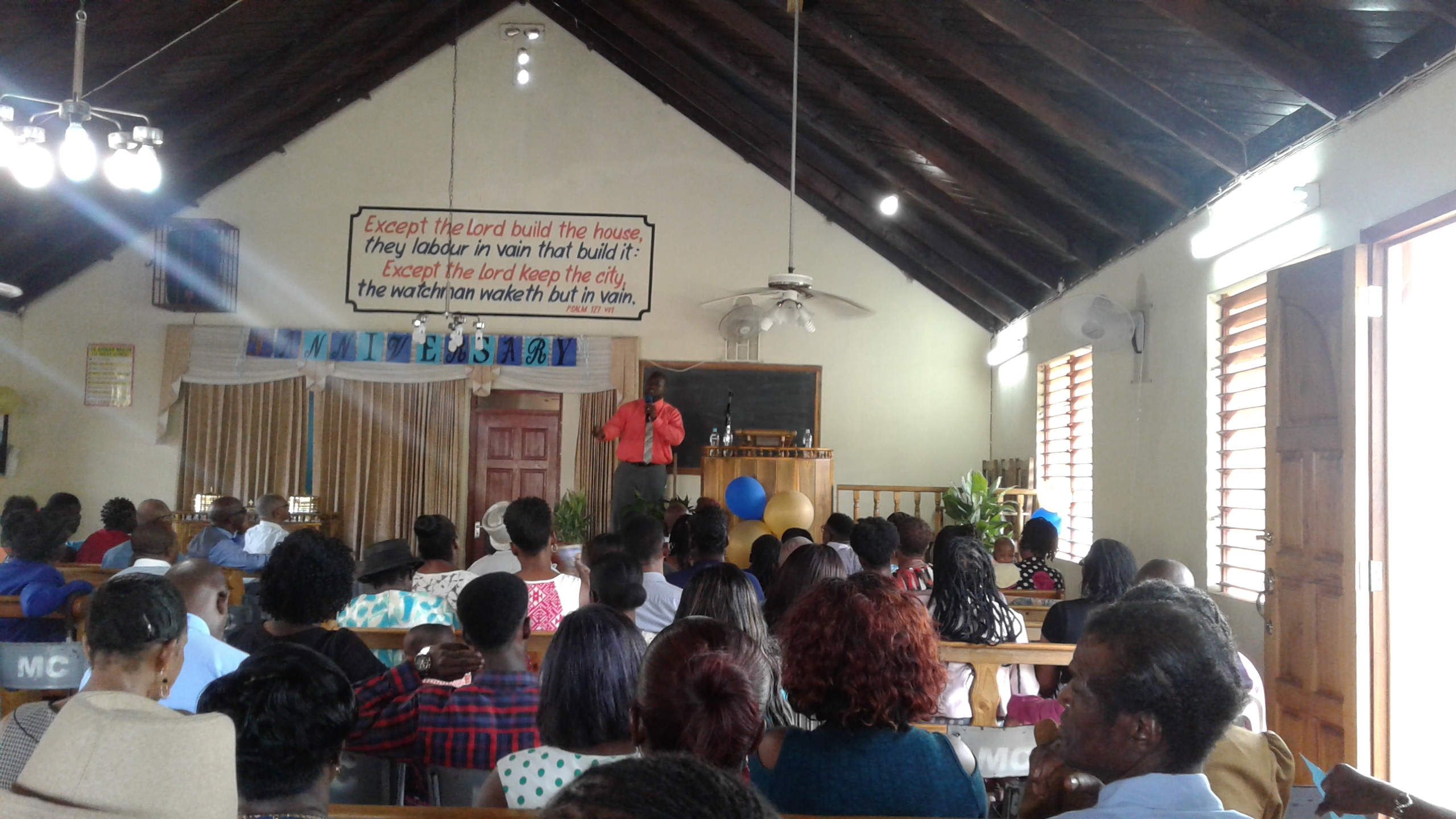 Bro Hay speaking to the audience 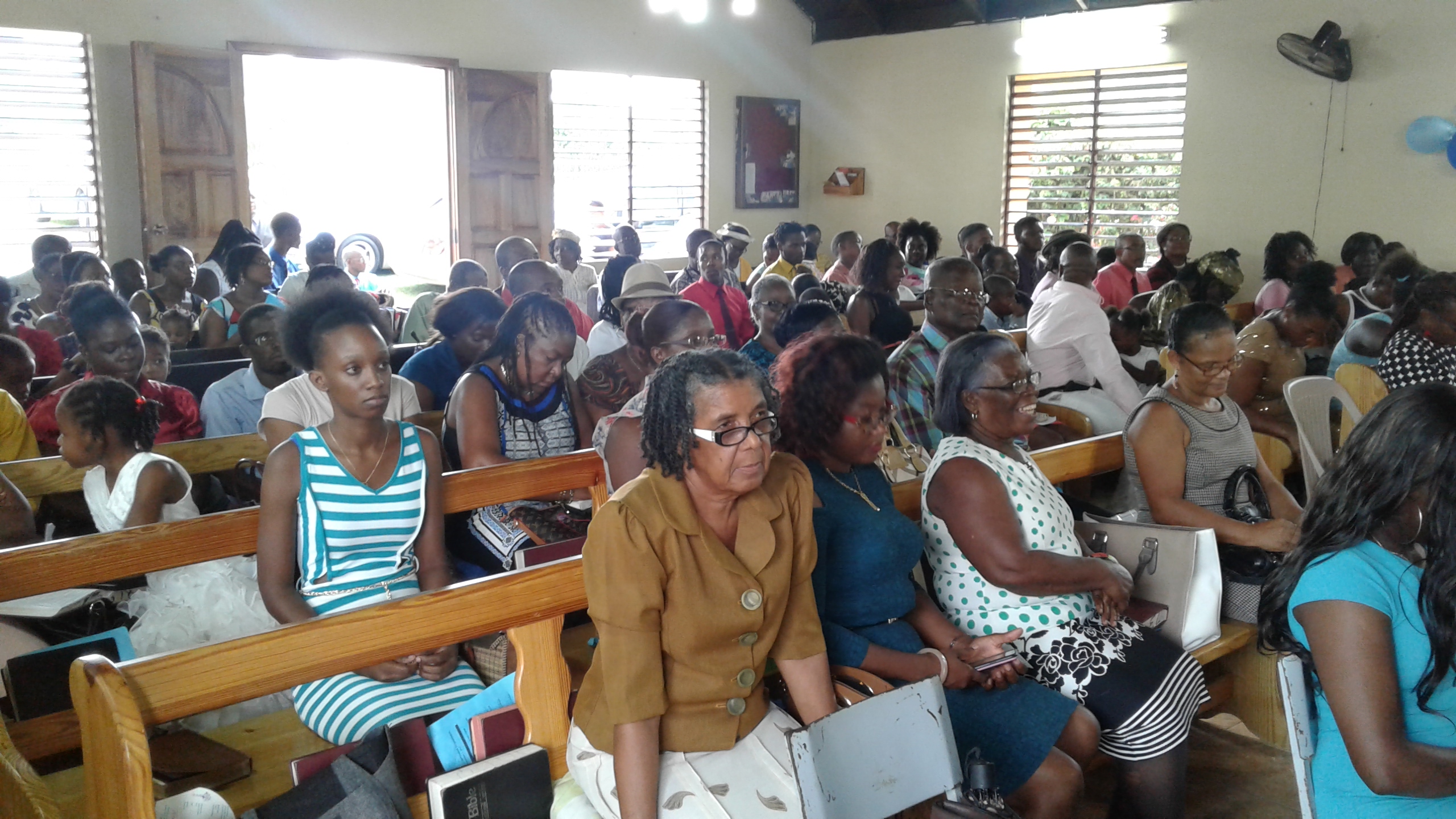 Congregants listening to the word of God 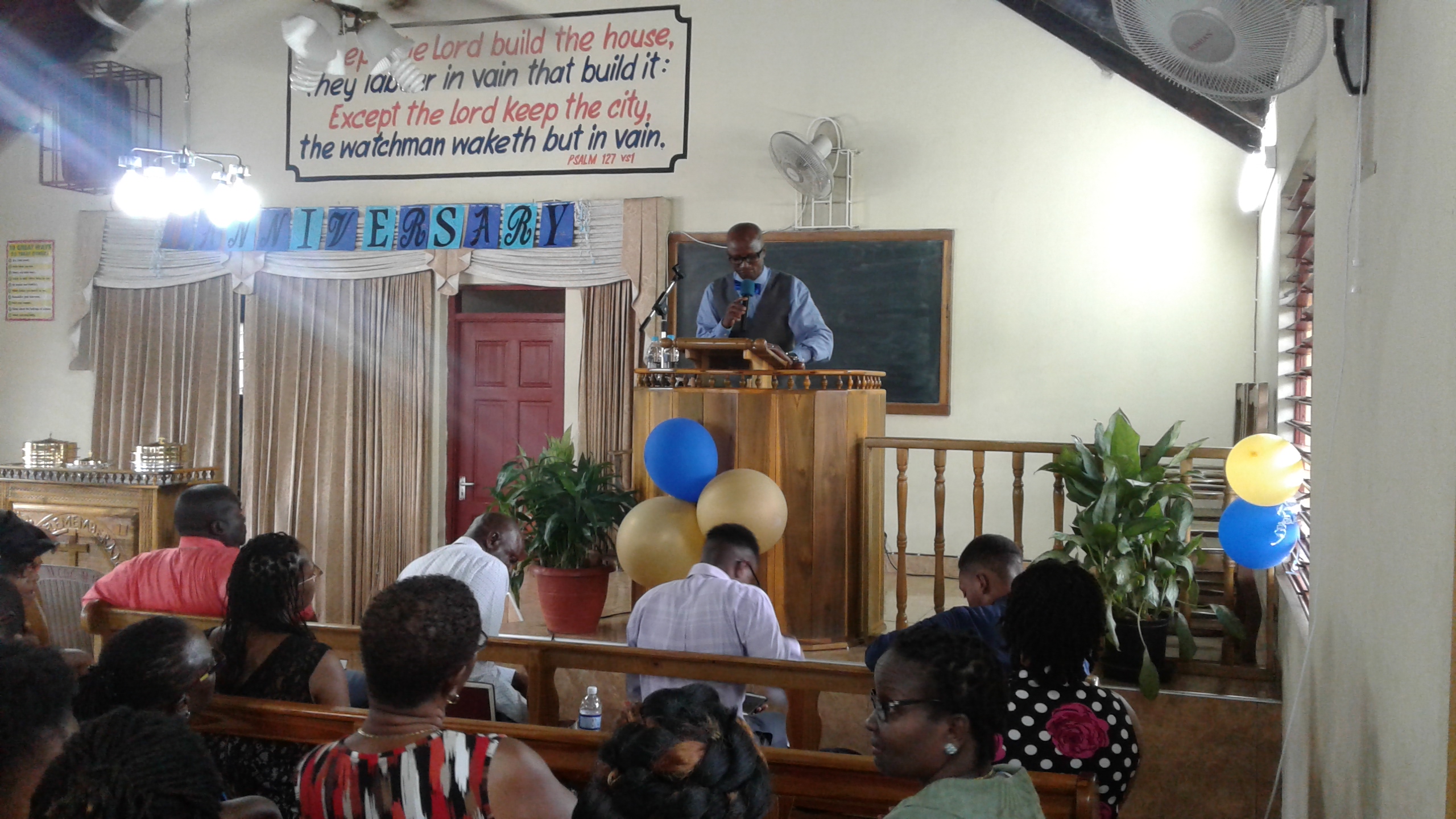 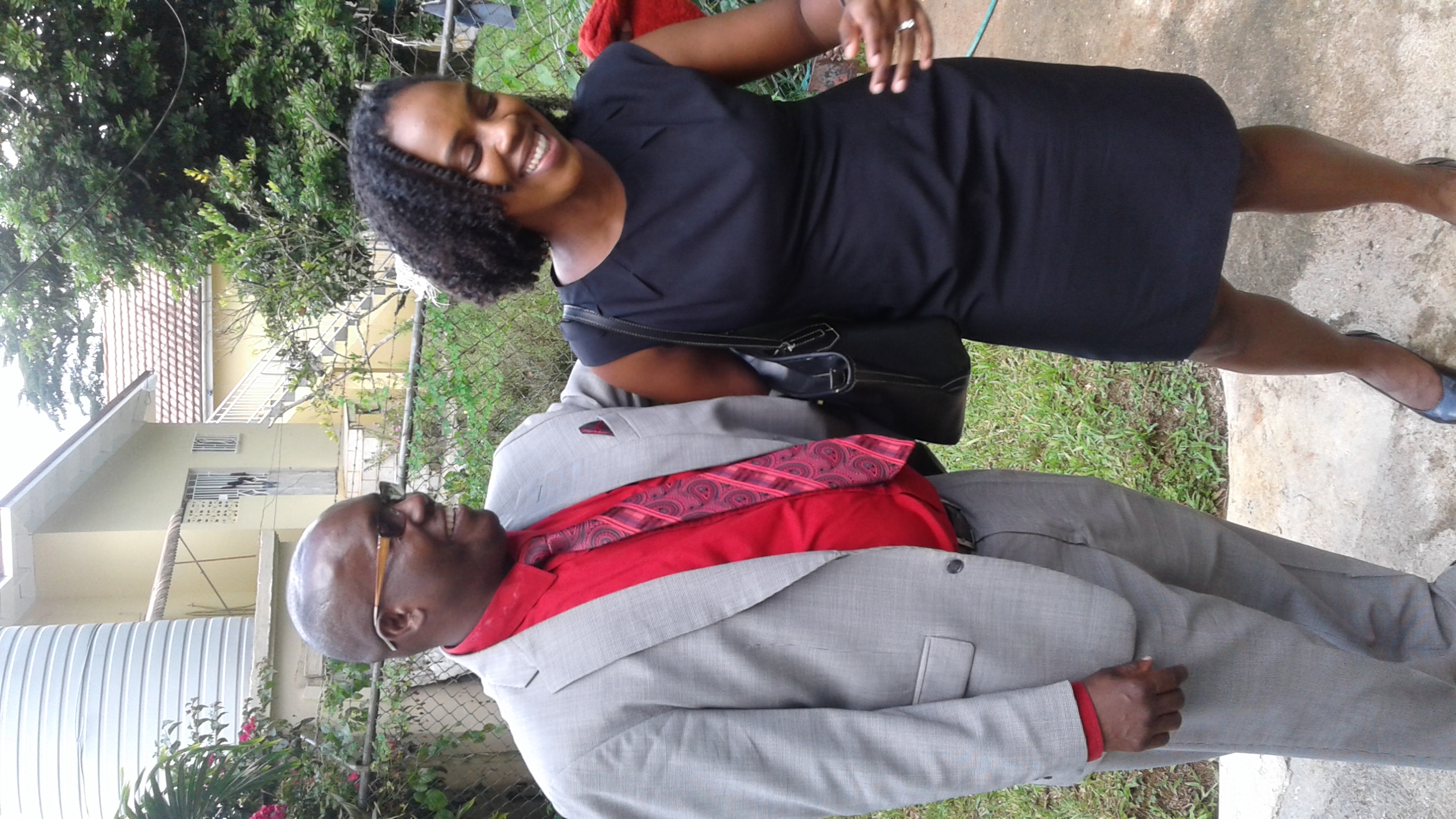 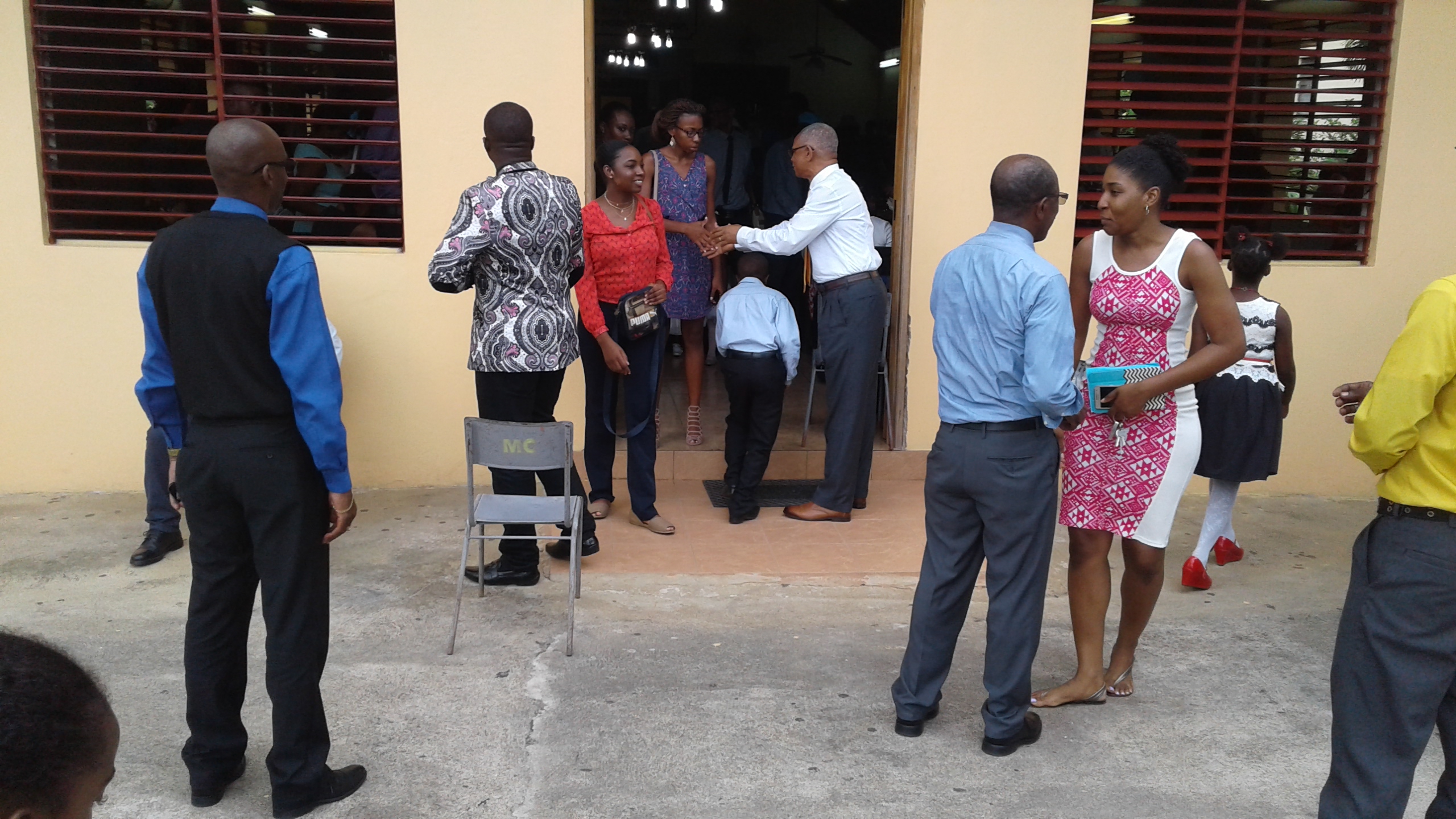 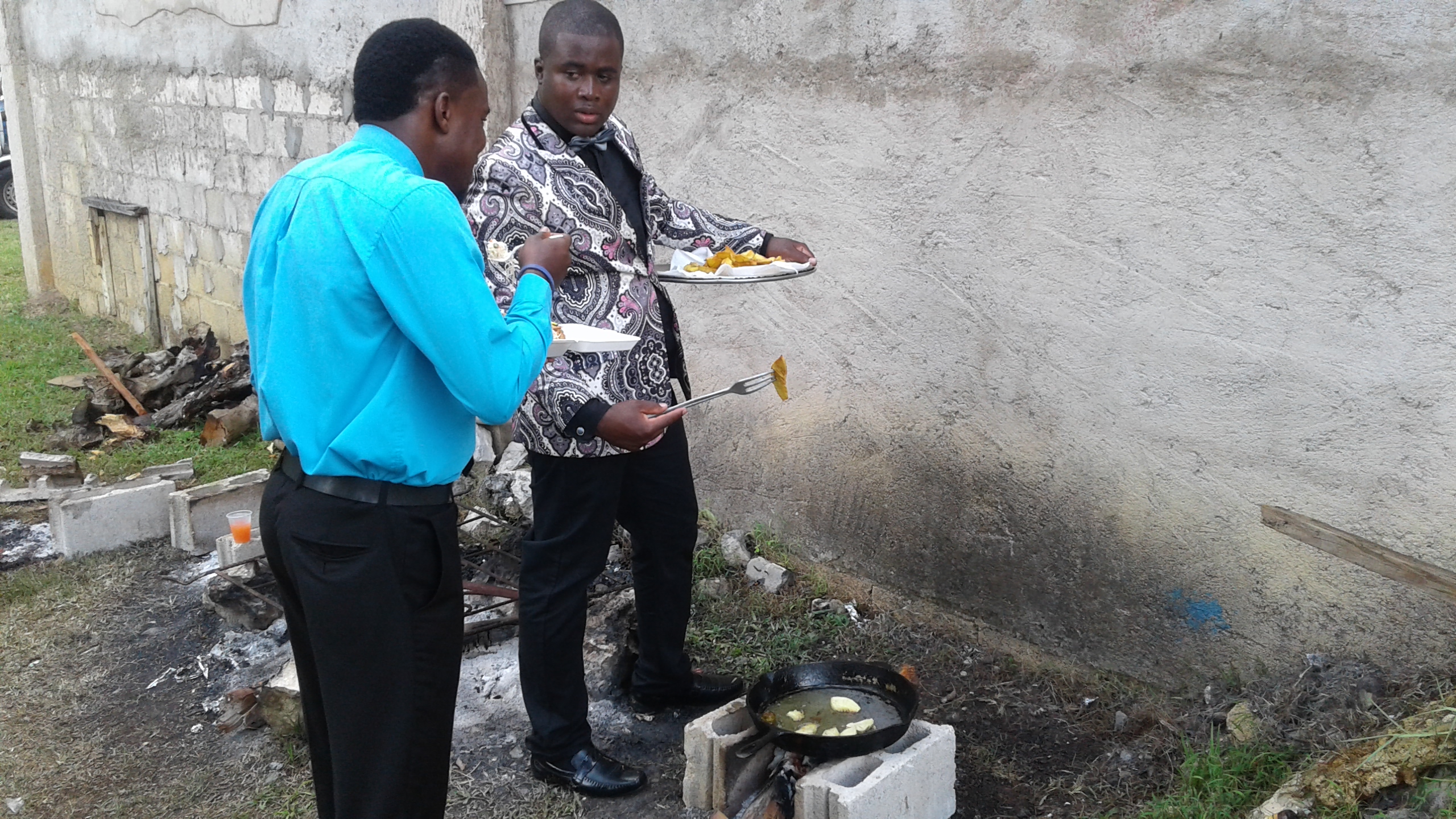 Found frying breadfruit around the fire 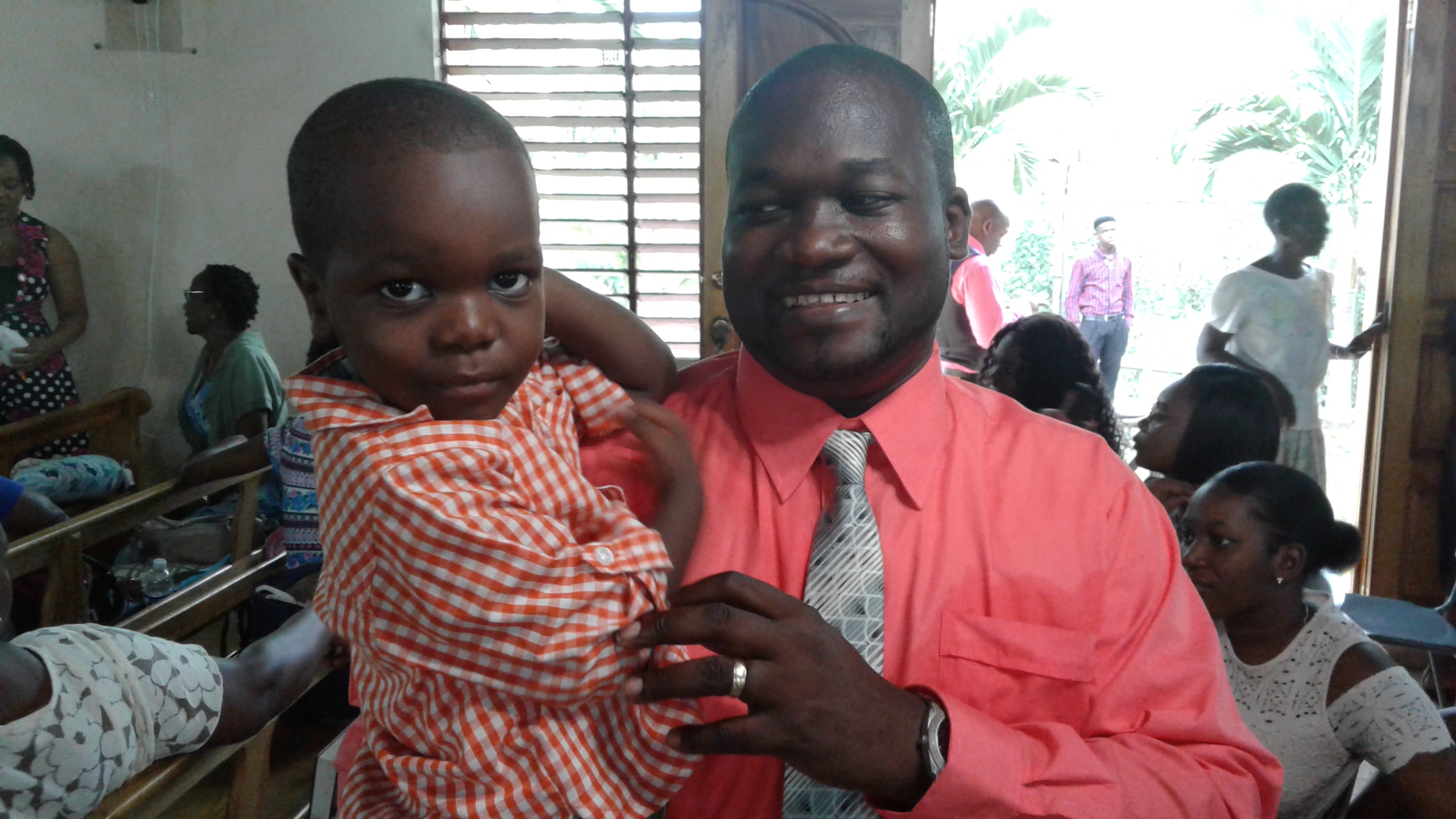 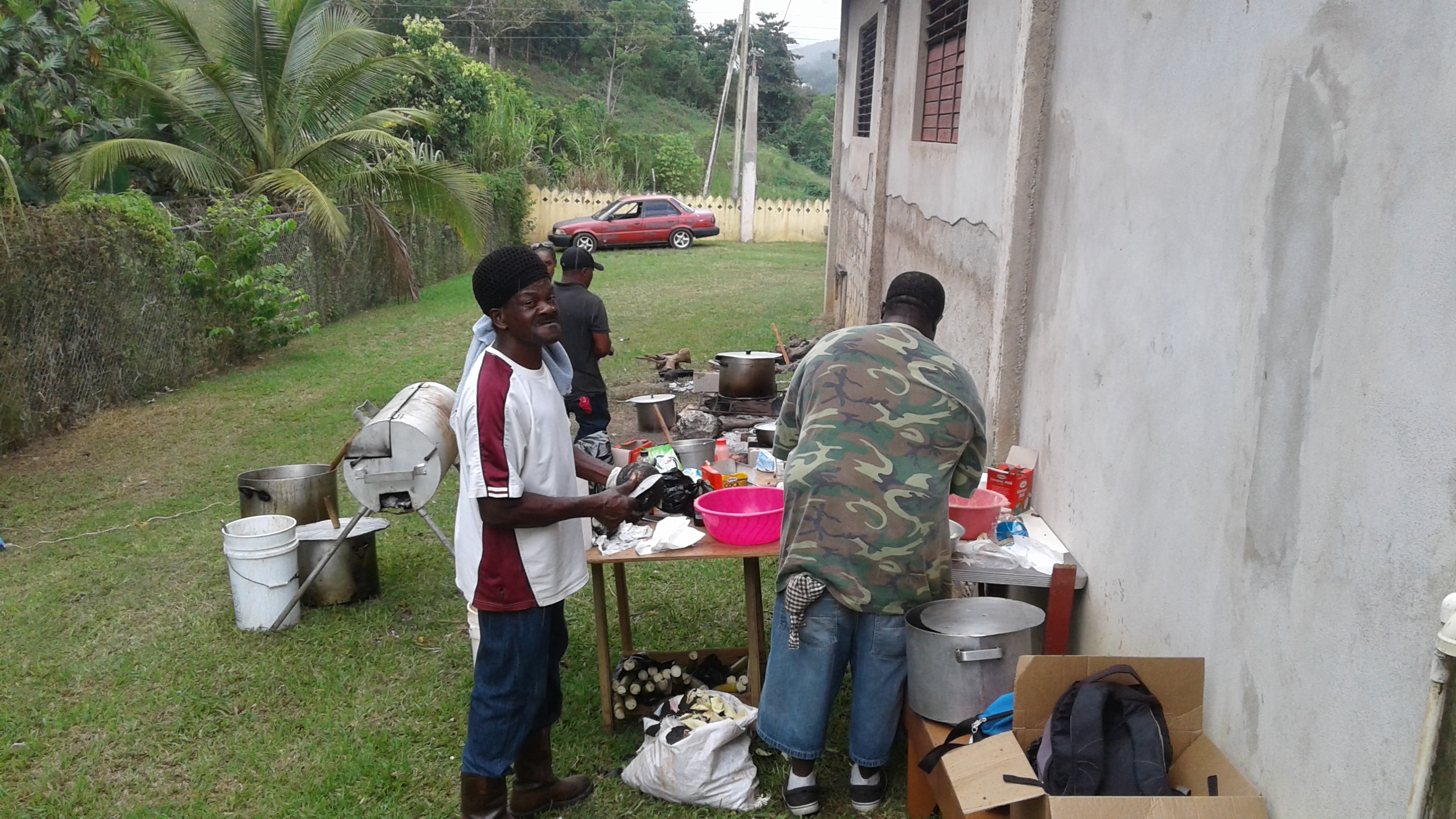 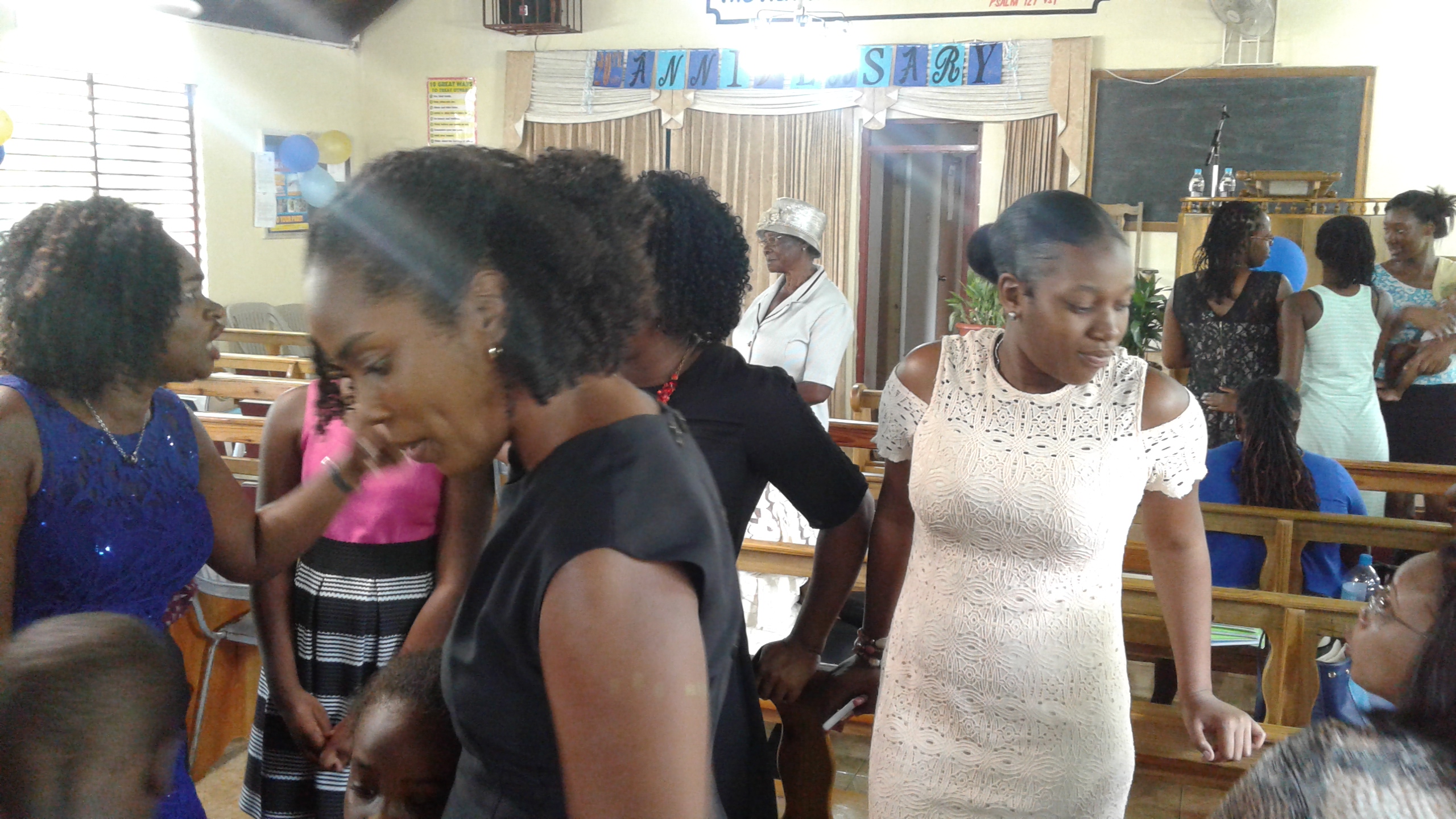 congregants greeting each other 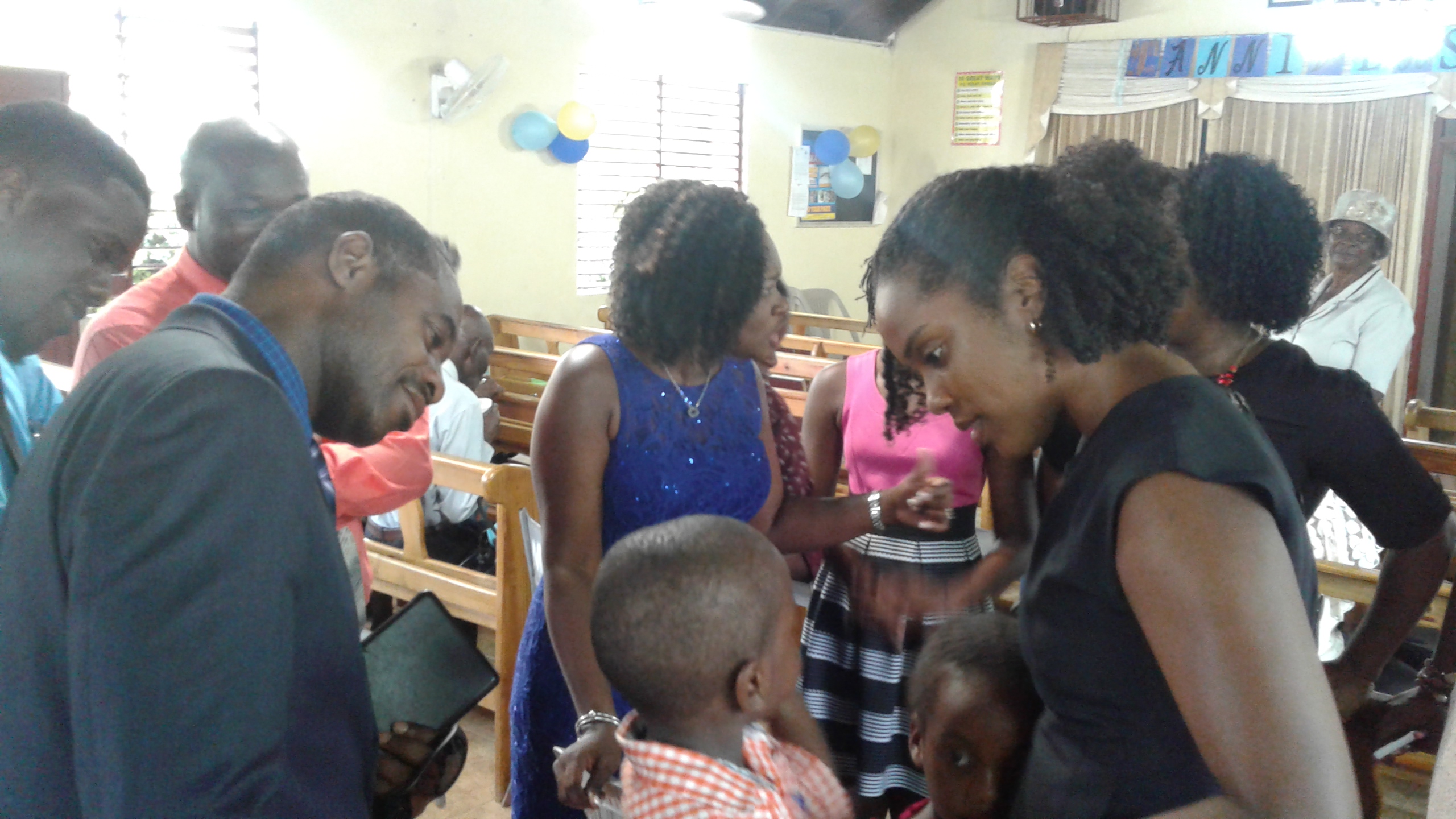 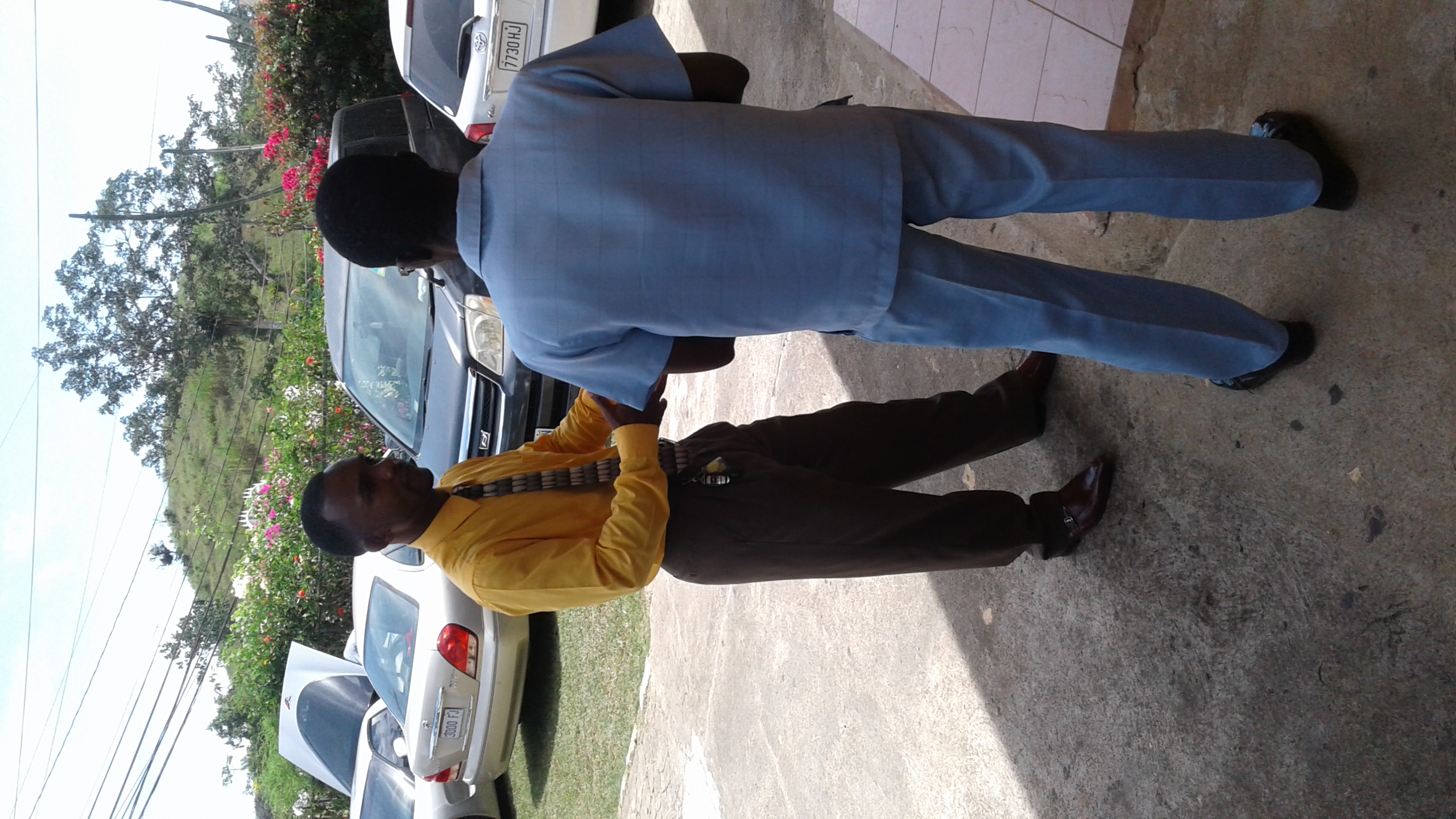