“Praise in the East” – Youth Fellowship in Portland

“Praise in the East” so dubbed by St Jago COC Youth Leader Andre Brown, was a tremendous success. Youth groups from five (5) congregations went to Portland to fellowship with the brethren at the Port Antonio Church of Christ. It was a two (2) day event which began Saturday December 15 and ended Sunday the 16th. The combined groups engaged in the activities of door knocking, football, dominoes, movie nite, nyamming on Saturday and on the Sunday which was “Youth Sunday”, there were even more fellowship exercises to follow. 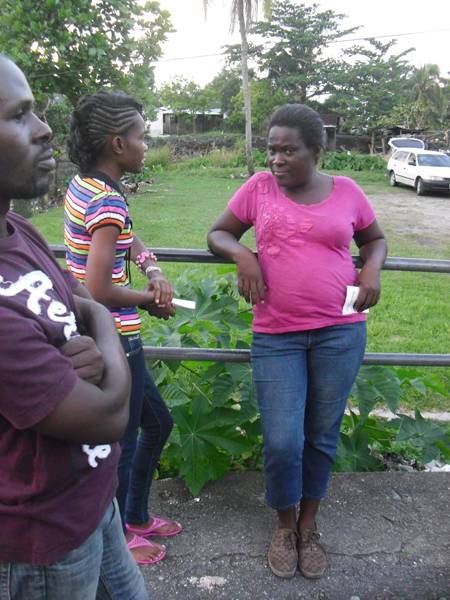 a Passerby being invited to worship
“Going out for door knocking was fun” said Andre Brown. “It was just the entire atmosphere, the community and the interactions with the people” he continued. Andre Medley, member of the Mona Church of Christ, gave the venture the perfect theme Don’t burn your Bridges as the group had to cross over several bridges on their way to evangelize. The football match was possibly the highlight for the Saturday night as the visitors took on the best of Portland. The match ended in controversy with the score 3 all, “Or was it 4-3?!” Andre Brown still jokes.
An inquiry into the “Movie Nite” activities by the COCJAMAICA team got the response “Sorry but I slept out most of it; but maybe that was the idea for having such boring films” said a visitor who wished to remain anonymous. “Sunday morning breakfast was awesome, thus setting the tone for the rest of the day” he added.

Sunday Morning Bible class was lead by Bro. Carson Daley, evangelist Port Antonio Church of Christ. His topic was, “Don’t waste your Talents” based on the parable of the servants and the talents. The morning worship service was led by four song leaders. The sermon was done by Andre Brown, which was entitled “The Bear is Here”. Seventeen (17) persons walked forward requesting prayers.