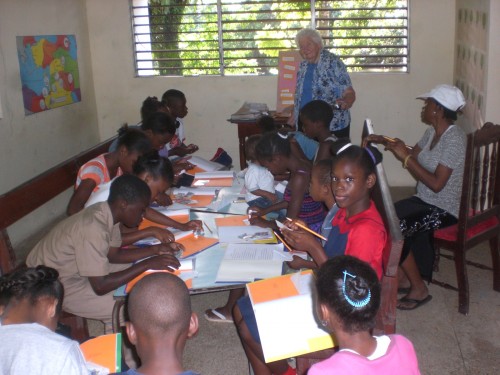 The Port Antonio Church of Christ in January hosted two weeks of Vacation Bible School and a one week Gospel Crusade. It was marked a notable success.

Brethren from many points in the United States converged on the north eastern coastal town of Port Antonio, were prepared for weeks of community work. Their planned work included Vacation Bible School, door-knocking and a gospel meeting. They arrived on Friday January 17, which gave them a day (Saturday) to recuperate from the trip and prepare for the work ahead.

The Sunday 19th marked an All-Day Fellowshiop event in which Speakers from different parts of the island and overseas exhorted the gathering. “It was a great joy to meet with the brethren on Sunday and enjoy a special day of speakers and a meal on the grounds. We were able to fill three of the spots for the pulpit lessons and also to teach a ladies class and a men’s class in the morning. It was also great to hear two Jamaican brethren bring great messages from the Word of God. It was a great time to be able to get to know some of the brethren from around the island and the brethren in Port Antonio.” said Bro Fred Rhodes, a member of the visiting team from the USA. Portland is known for it’s abundant rainfall and while some of the lessons were interrupted by rain that caused the speakers to have to stop their lessons for a brief time, the day’s speakers enjoyed a day of spiritual and physical food.

During the week of the Vacation Bible School (VBS) many doors were knocked and Bible studies conducted. The pre-arrival work done by the local congregation allowed the visting supporters to spend more time in conducting Bible studies. It was felt the the quality of the studies was much better as a result of an existing relationship made by the local brethren.

The VBS started with about 50 students and by the end of the week it was over 100 students. Each day there were numerous adults around the building and team members who were not teaching a Bible class worked on teaching these individuals the Gospel.

During the first week of the VBS, the congregation with the help of the overseas support we were able to conduct devotionals at several of the local schools. This was quite a treat for the American brethren since many do not have that opportunity in the states. “We were blessed to have with us a young lady from Mexico, Alicia Hernandez. She spent a lot of time in the classes as several schools and used her home language of Spanish to teach in the schools. This was a great opportunity and will give the church a lot of exposure in the community. She used the language to do some Bible teaching and in one class was also able to teach the teachers. She had a pretty busy schedule. They would have kept her a lot more than she went, but we had to slow it down a little. She also taught a class in Vacation Bible School every day.” indicated one of the overseas brethren.

Speaking with a local resident

On the Thursday and Friday there were classes for men and women in the evening. The ladies had a class that taught them how to teach children’s Bible classes. The men classes centered on leadership in the Lord’s church. It was well attended and had visitors from the community each evening. Chris Westphal and Ricky Berger presented great lessons to help the audience grow and do their part to propel the Lord’s church to grow and mature.
The Friday Brad Harrub with Focus Press joined the team and made presentations and distributed material on Creation/Evolution in the public schools.

The week of January 26 marked the begining of the Gospel Meeting Themed “Prepare to meet thy God”. The line-up of preachers the second week included Joe Longfellow in the Sunday AM and Chris Harris in the PM. Brad Harrub delivered three lessons during the time that helped people to see that God’s way for the home is the best. Chris Westphal concluded the week with a lesson on Faithfulness to God. Each evening the lessons were well attended with about 100 in attendance.

The overseas teams were lead by Bill Noblin, Mike Richardson and Fred Rhodes. Who have been coming to the island of Jamaica for number of years. They have indicated “A great debt of gratitude goes to each team member for their tireless work and talent that they put to use on the island. And we must never forget that we spent a lot of time praying that God would bless our efforts.” The entire team consisted of Joe Longfellow, Chris Harris, Chris Westphal, Ricky Berger, Brad Harrub, Will Harrub, Reese Harrub, Mary Gingerich, Amy Gingerich, James Nelson, John and Sherry Griffin, Alicia Hernandez, Freda Arriaga, Vella Puckett, Mike and Diane Richardson, Bill Noblin, Fred and Dorothy Rhodes.