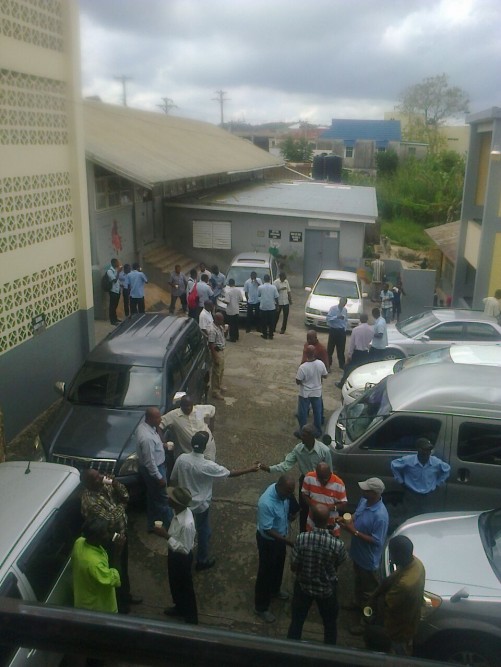 The annual Men’s day was successfully hosted over the weekend by the Spauldings COC on Saturday November 1, 2014 at the Spauldings Primary School. The theme was “Be strong, Be a man”

Brothers having exchange over lunch break

The keynote speaker was Bro. Michael Dunbar (Highgate COC) who delivered an excellent lesson on the theme. Dunbar mentioned that “to be a strong man is not determined by the world’s standard but rather the standard of God.” He encouraged the men to be like Noah, who did right in a wrong world. He further highlighted that to be a strong man is to walk in the Lord and a real man is a man of integrity!

Bro David Henry (Jackson COC) conducted a song leaders seminar. “This was very informative and interesting” as shared by one brother who attended the session. Some of the things looked at during the interactive song leader session was:

Men’s Day also included a panel discussion in the afternoon session after Lunch. The panellist were, Bros. Michael Dunbar, David Henry, Gladwyn Kiddoe and E.C Wilson. “The discussion was very vibrant and engaging” said a JSP Student who highlighted that more young Christians should have been present to benefit from the discussions. One of the questions to the panellist which stirred up the crowd was “Noting a rapid decline in the moral standards of young men in general, with the cancellation of several youth events, and the fact that young men are no longer supporting church events, what is the leadership of the church doing to fix this problem?”.

E. C Wilson (Elder Moneague COC) suggested that the leaders should go back to grass root and teach the young men how to survive these evil days. Other suggestions came from Bro. Williams a minister at the Spauldings congregation. He said that in the 1970’s the youths were zealous for God and very knowledgeable about God’s word. He further went on to say that the young people should study the word of God.

Bro. Steven Grennell spoke about a disconnect with the older men and the young. He suggested that the older leaders were not paying much attention to fellowship and social activities but rather too much focus has been placed on pulpit ministry. Other topics discussed were

After the panel discussion there was a brief minister’s meeting to discuss assistance to Bro. Winston Bembridge, the minister of the Old Harbour Congregation, who is currently extremely ill. The event ended with a prayer session.
The day with over 50 men in attendance was viewed as a great calendar item for Men within the COC Family and looked forward to next year’s staging in which the Jackson congregation wil host.