Come Let us Reason together in Moneague

Brethren from San Marcos and neighbouring areas in Texas USA spent their Spring Break on the north of island reasoning with the communities of Moneague and St Ann’s Bay on spiritual values that would help individuals personal development and relationship with God. Their efforts were centralized around the Moneague Church of Christ, Gospel Meeting “Come Now, Let us Reason Together” held March 10 – 15, 2013.

The central theme for the Gospel Meeting came from the reference text Isaiah 1:18-20. The congregation’s leadership saw the current need to address the community to come together and pay attention to some needful instructions. Andy Baker, associate minister with the University church of Christ in San Marcos was the night speaker at the Gospel Meeting delivering practical lessons for the audience to reason about.
Based on the theme, the speaker sought to reason with the audience on the following sub topics:

The messages were tailored to appeal to both Christians and non-Christians. They encouraged the Christians to maintain and build on their relationship with God and invited the lost to come to the Lord and be one of His true disciples. The speaker compared us with Israel that was presented in the book of Isaiah and reasoned with the audience to show them how just like Israel, God will forgive us and we can have a relationship with Him if we choose to follow His plan. 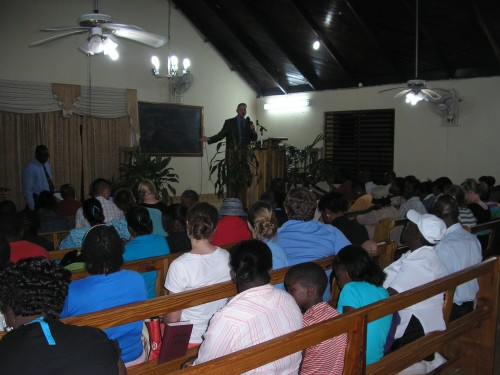 Another aspect of the crusade was the day to day evangelism in Moneague and its environs. Throughout the days from Sunday afternoon to Thursday track distribution and Bible Studies were done. The total number of Twenty One (21) American brethren came. Some worked in Moneague during the days while the others worked in St. Ann’s Bay. However, during the evenings all missionaries attended the meeting in Moneague. There was approximately ten (10) America brethren in Moneague working along with some brethren from Moneague to do evangelism. A total of twenty-five (25) studies were carried out. Some of them had follow-ups. From the twenty-five studies that were done four (4) precious souls were born into the kingdom of God – two (2) men and two (2) women. Quite a few of those studies require follow-up, in which the Moneague congregation continue to solicit prayers as they continue with them.

The crusade was broadcast internationally by Bro Derrick Brown from St. Jago COC, on Bible Talk TV website. The meeting was well supported by members from Moneague and other congregations as well as visitors. Each night there was soul-stirring accapella singing led by Bro Carlton Graham, Bro Rohan Findlay, Bro Oliver Bembridge and Bro David Henry.

The pastors of the congregation: Bro Euston Wilson and Bro Owen Findlay thought it was a successful week as the gospel was delivered to many people on the street and in their homes through Bible studies, track distribution and the messages from the pulpit.