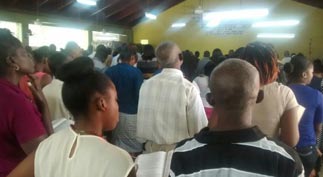 The 34th annual Jamaica Lectureship better known as the Annual Ash Wednesday Lectureship was a tremendous success. The event attracted over 26 different congregations from across the island as well as from the USA. This year’s event was under the theme “The joys of Christianity”.

Bro. Andre Medley from the Mona Heights congregation was the chairperson of the event and he did a masterful job in ensuring the smooth transition and flow of the entire Lectureship. The lectureship began with a short devotion which was led by Bro Kerry Walcott minister of the Mile Gully Church of Christ. This was followed by the introduction of the day’s first speaker who was Bro. Carl Powell.

Bro. Carl Powell, the minister of the Mandeville congregation, spoke on the topic “The joys of Christianity”. He set the tone for what was going to be a spiritually uplifting day. His message was centred around the idea of being joyful at times. His sermon was based on Phil. 4:4 “rejoice in the Lord always and again I say rejoice”. ‘The Christian joy is not always external’ was one of his highlights to a joyfully building audience.

The second of five speakers was Bro. Harold Gilmore from Alabama, USA. Bro. Gilmore had the audience in utter suspense when he tickled their minds with his topic “The future of the Church depends on F.A.T people”. FAT was an acronym for Faithful, Attainable and Teachable. His sermon challenged the listeners to define their relationship with God. He skilfully made his audience do some self introspection, as his dynamic and encouraging message prompted all to gain some spiritual weight.

Bro. Francis Yorke, deputy director of the Jamaica School of Preaching, was the next preacher to take the stand. His topic was “Remember what Jesus did for us”. Bro. Yorke did a classic and efficient job in stimulating the spiritual minds of the audience. His sermon was all about Jesus the master teacher and his impact on us Christians. The main idea of his message was Christians are to be imitators of Christ.

Bro. Romeo Tomlinson (Al. USA), one of the organizers of the event and former minister of the Mobay congregation, was the fourth speaker. He spoke on the subject “Being contented in Christ”. His sermon was intriguing, interesting and very edifying. He started out by defining what was contentment before stating that contentment was an attribute which must be learnt over time. “Bro Tomlinson did an excellent job with his topic” said one of the attendee.

The final speaker for the day was Bro. Jimmy Whaley Jr from South Carolina, USA. Bro. Whaley spoke on the topic “Gaining the victory in Christ”. His sermon came from Phil. 4:13 “I can do all things through Christ who strengthens me”. Bro. Whaley highlighted that in the text, there was The Opportunity, The Objective, and the Operator. If we as Christians are going to gain this victory in Christ Jesus, we need to seize the opportunity, fulfil the objective but all this is only possible through Christ Jesus the Operator.

The lectureship ended with an abbreviated panel discussion which was followed by the usual singing and announcements. It was a great day of fellowship and praise to God. The name of the Lord was indeed lifted up. However, just when we thought that it could not get any better, one precious soul was added to the body of Christ later in the evening.