Recently, the Linstead Congregation had a street meeting to spread the word of God in the town square of Banbury, a community on the outskirts of Linstead town, St Catherine. Bro Dave Osbourne expressed no fear in letting the residents know that the Church was in the saving business and that it could be found in Linstead.

Currently, the Linstead congregation meets in the Gainsville Plaza next to the Singer Store in Linstead Town. For sometime they have been having visitors to their general worship and youth meetings from the Banbury area. The congregation wanted to further expound the truth via the street meeting. 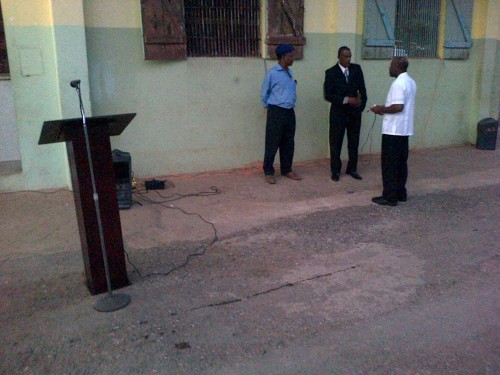 Dave Osbourne and members preparing for Street Meeting
On February 24, COCJamaica journeyed to Linstead along with a team of supporters to support the street meeting. In the rural community we passed vacant church buildings in ruins. Was this a reflection of the heart of the people towards religious matters? This was no deterrent to the Linstead congregation as this only confirmed the need for messengers of the truth in the area.

Brethren from the Elleston Road, Pembroke Hall, Moneague and St Jago congregations were present to support the Linstead Family. At first, we found ourselves at Bottom Banbury but were quickly redirected to Top Banbury where once approaching the three way junction we stumbled upon Bro. Dave Osbourne who was already speaking to members of the community. He was accompanied by Bro. Richard Reid who was busy stringing away wires as he set up the audio system for the evening’s event.

The Street meeting took place between a shop and a retail store that sold beverages. Before the start of the event, accappella music was played which alerted the neighbourhood that something was happening in town. As the small crowd began to assemble, Bro Junior Cole of the Elleston Road congregation began with introductions and welcomed pedestrians to join the gathering. He was followed by Bro Oneil Harrison who led the audience in uplifting singing. Bro Osbourne delivered a powerful and fitting Street Meeting Sermon regarding the “urgent appointment” in which man must prepare for. He reminded us that our souls were too precious for it to not be kept in good condition. He encouraged the audience to prepare to meet God for “What good will it be for a man if he gains the whole world, yet forfeits his soul?” Matt 16:26. Bro Osbourne implored the crowd that the opportunity to be saved is always today and that there is danger in delaying. This message was further emphasized in Bro Reid’s altar call.

At the end of the sermon four persons walked forward requesting prayers and information on how to become a Christian. At the time of this report one person has since been baptized. We continue to pray for the work of the Linstead congregation.