Bro. Gladwyn Kiddoe recently commented during a JSP Class at the Patrick Gardens COC that the Churches of Christ were pioneers in Tent Meetings in Jamaica during the period of the 1960s when the Church was first introduced to the Island. Like ‘one to one’ personal evangelism, Tent Meetings can be very effective in attracting and/or reaching unbelievers. It is the firm belief of Patrick Gardens Minister Carl Mitchell that many persons would feel more comfortable under a tent, rather than being in a church building. Also, with the outside atmosphere, passersby and persons living in the immediate vicinity are within ear-shot of the Word of God as it is preached nightly.

On Sunday, February 10, 2013, the Patrick Gardens congregation continued the tradition of bi-annual Tent Meetings with the hosting of an 11-day Crusade under a big tent. The theme of the Crusade was “The Inevitable, Inescapable Christ“. The speaker for the two weeks was Bro. Darrell Holt of the Figueroa Church of Christ in Los Angeles, California. Bro. Holt is no stranger to Jamaica, and to Patrick Gardens in particular, as this was his third time speaking for the Congregation.

The activities leading up to the commencement of the meeting included distribution of flyers in some five communities in and around the Patrick Gardens COC. There were also mobile announcements and knocking on doors. On The Saturday before the Crusade was scheduled to commence, the Jamaica School of Preaching, along with members from other congregations assisted Patrick Gardens in the door knocking effort. 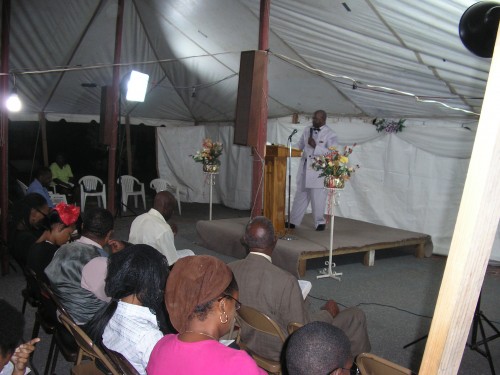 Darrell Holt preaching to gathering under tent
From the outset, the audience was in for a healthy feast of God’s Word. Bro. Holt is a student of God’s Word. He is very thorough and methodical in his approach. In his own words, he is NOT an “expository” preacher. That is, ‘one who presents the meaning and intent of a Bible passage, providing reasoning and examples to make the text clear and understandable’. He claims, however that he is a topical/doctrinal preacher, i.e., one who uses as many Bible passages possible to help his audience to understand a particular topic. As such, topic after topic, the audience was provided with a numerous Bible passages each night to emphasize the topics being discussed.

Night after night, Bro. Holt patiently helped the audience in understanding various Bible passages dealing with topics such as ‘Why the Church of Christ Does Not Keep the Sabbath‘, ‘Baptism: one time or One Kind?‘, ‘Calling Bible Things by Bible Names and Doing Bible Things the Bible Way‘, among many other inspiring and thought-provoking messages. Bro. Holt is well-known for his lengthy sermons, something which he is unapologetic about. In his own words: “I’ll take as long as I need to help you to see it…” It is with this in mind that each night, visitors were afforded the opportunity of asking questions following the sermon.

At the end of the meeting, seven (7) souls were won to the Lord and numerous opportunities for further studies.

In his concluding remarks on the last night of the Crusade, Bro. Carl Mitchell, along with other Ministers present expressed the desire for there to be a City-wide Tent Meeting of the COC in Jamaica. The idea is that such a meeting would be strategically located in a central area that would attract support for most, if not all of the congregations within the Corporate area. According to Minister Mitchell, this type of preaching is needful and would only serve to enhance the work of the Church in Jamaica.

Brothers Andrew Blake and Oneil Harrison led the congregation in soul-stirring singing throughout the two weeks. The meeting was supported by a number of congregations across the island.