On March 18th and 19th, the Morant Bay Church of Christ led two nights of street preaching in the communities of Bamboo River and Lower York, settlements on the south side of the eastern parish of St Thomas. The meeting held in Bamboo River was staged by the church for the first time in that area. “There was a need for this community to be exposed to the gospel and based on a prolonged history of crime and violence, the good news was a dire necessity” expressed Bro. Hay, one of the coordinators of the meeting. 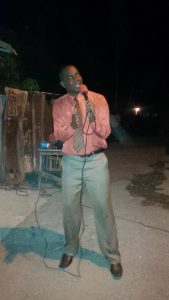 Joel Perotte speaking on the street lightsThe meeting in Bamboo River commenced with some lively and inspiring Acappella choruses led by Br. Michael Brown (Mona COC). The guest preacher for the night was Bro. Joel Perotte (St Anns Bay COC). who did a very practical sermon entitled “God’s Free Gift”. The lesson was based on the texts Romans 3:6, John 3:16 and Acts 4:12 in which Bro. Perotte spoke about the fact that persons like to receive gifts but the gift of salvation, although free, is not readily received by the masses. He further reiterated the fact that our real problems are not our husbands, wives, common laws, partners etc but our real problem is SIN. In his lesson he expressed suggestions regarding means and ways of alleviating this sin problem.

“The reception from those that gathered and the general community was over all quite friendly and the turnout was also quite encouraging” stated Bro Michael Dehaney minister of the Morant Bay congregation. The Street Meeting was supported by members from the Mona, St Ann’s Bay, Elleston Road congregations and twenty (21) Spring Breakers from the churches of Christ affiliated with the Lipscomb University located in Nashville, Tennessee USA. Lively discussions were held after the meeting to further expose the practices and doctrines of the church to the residents. 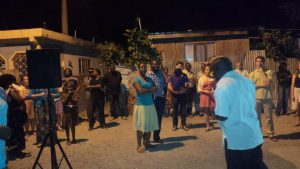 Bro Michael Dehaney introducing guest speaker Joel PerotteThe second meeting on Tuesday the 19th was held in Lower York, a predominantly farming community a few miles west of Morant Bay. This street meeting was held along the main road leading to Seaforth Town. Not altering an already successful format held the night before, Bro Michael Brown once again began the meeting with some lively Acappella choruses. This night however he handed the baton to Bro. Damion Lowe (Elleston Road COC) who led the gathering in some more soul searching choruses. Bro. Joel Perotte prepare a heart wrenching sermon entitled “What must I do to be lost?”. The main texts used were Matt 7:21, Samuels 12:15 and II Thessalonians 1:7-9. He emphasised that “we need to do nothing in order to be lost” and as such if we are serious about Christianity and our souls, we need to stop procrastinating and get up and follow the steps to salvation which he clearly defined in his sermon. 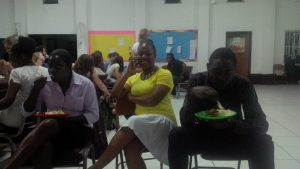 Members fellowshipping at eat-inAt the end of the meetings, the Morant Bay congregation hosted the visitors to a small eat-in fellowship at the church building.
“We are blessed that we had an opportunity to expose the Gospel in these communities. We were really elated that the gospel was preached and we sincerely hope we can see the fruits of our labours as the seeds have been planted and only Almighty God can bring forth water to let those seeds germinate.” expressed a happy member.