Each third Sunday of January, the Mandeville congregation begins their year with a four (4) day Revival Meeting. The First Night is dedicated to singing and selected song leaders from across the island collaboratively lead the congregation in songs and hymns.

Nothing can really describe the feeling of excitement that precedes the Singspiration in Mandeville. The overcast skies and the slight rain were not a deterrent to the crowds that started to gather from as early as 6:00 pm. “My arrival time was at 6:08 and already people were seated inside, ready for what would take place,” said Song Leader Andrew Blake. About 6:15 to 6:20 there was a mad rush as the crew from Sandy Bay arrived with a myriad of overseas visitors, mainly Americans who came to assist with Sandy Bay’s Gospel meeting and VBS. At this time the auditorium was literally filled with people and the place was filled with excitement.

At 6:30 the ball got rolling as Bro. Carl Powell began with opening statements and it was time for singing. The song leaders for the night were (in order of appearance) Bros. Andrew Blake, Kerry Walcott, Michael Brown, Donovan Williams and Bro. Oliver Bembridge. Apologies were made for Bro. David Henry, an avid supporter, as he was presently overseas. He was truly missed. “My job was really to get the voices in order with some choruses and I also did one song from the book,” said Andrew Blake. “I started with the chorus ‘In His Presence’ and ended with the song ‘When We All Get To Heaven’. I will not say anything more than to say that the song had four verses and we sung all four verses, repeated the last verse and repeated the chorus after the last verse,” continued Bro Blake. 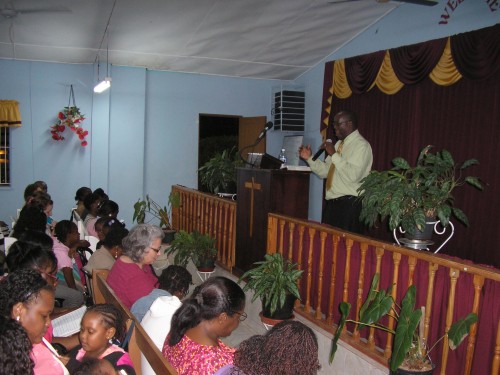 Bro. Oliver Bembridge leading congregation in singing
After Bro. Blake’s song selection, Brother Walcott from the Mile Gully congregation was next. Brother Walcott’s choice of songs were just what the doctor ordered for the soul in need of encouragement as he interspersed his choices with comments about the challenges faced by the Mile Gully COC and how God brought them through it all. It was a time of revival and renewed hope. His choices included songs like ‘Shelter in The Time Of Storm’ and “Let Me Live Close To Thee”. He was followed next by first-time song leader Bro. Michael Brown who took the baton and ran with it. This was Michael’s second time at the event and he fully enjoyed an environment where the song leader is not chastised for minor errors but is eagerly supported by members wanting to simply give God the praise. Michael led us in songs such as ‘Beyond this Land Of Parting’ and ‘O I Want To See Him’ Then the baton was passed to Bro. Donovan Williams of the Christiana congregation.

Bro. Williams led us in some songs that we do not normally sing and brought out many vintage songs. He started out with ‘He Gave Me a Song ‘ and sung other old time favorites after which it was time for Bro Oliver Bembridge of the Tydixon congregation.

Bro. Oliver brought down the house with many favorites and vintage classics. He started out with the chorus ‘Worthy is the Lamb’ and belted out ‘His Grace Reaches Me’. Songs like ‘Hold My Hand” and ‘ I’m Going that Way’ will not be forgotten soon.
An impromptu and welcomed addition to the agenda was Bro Medley of the Grange Hill congregation who was called up to the podium to sing ‘My Jesus Knows Just What I Need’. 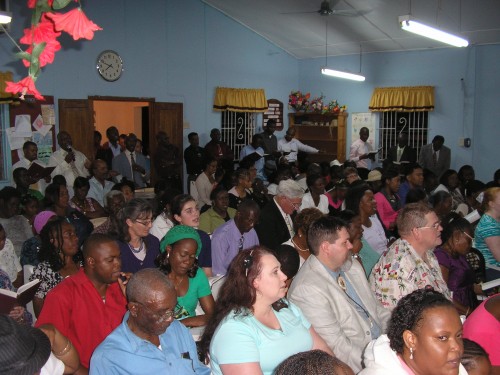 congregation singing with no seats to spare
In closing Bro Winston Bembridge led ‘I want to be a worker (Singer) for the Lord’. He asked for special permission to change the word “worker” to “singer” as he believed that the night’s exceptional singing was a testament to the fact that we all wanted to be great singers for the Lord. He pleaded for the starting of a school in Mandeville for the Jamaica School of Singing and pledged to be its first student. Overall it was a joyous experience and we had congregations from as far as Grange Hill and Amity in the West to St. Andrew and Elletson Rd in the East.

Singing tun up till it buk!