Gayle calls on community to do something!

The community of Gayle, a settlement in the parish of St Mary with a population of 3238 as of 2009, were challenged to “do something” during the two weeks Gospel Meeting hosted by the Gayle Church of Christ under the Theme “The sin of doing Nothing”.

COCJamaica team made its way through the St Mary Hills, although not the quickest route it was, still debated, the most scenic. We crossed rivers, bridges, valleys, and a host of friendly & helpful people directing us to the Gayle community “Yeah man gwan straight up” one man pointed.

On arrival we came to a busy town square filled with night life. Just outside the town square a Gospel Meeting was preparing to bring spiritual life and action to the district and visitors from surronding communities. Bro Andrew Blake was asked to lead choruses and Bro Ean led song service.

Jevon Barrett (student at JSP and Gayle’s child of the soil) preached the Friday Night we visited. His lesson was well prepared and examined the possible reasons individuals were “doing nothing”. He indicated five (5) P’s that prevented individuals from doing something about their soul’s salvation: Possession, Position, Power, Prestige and People. 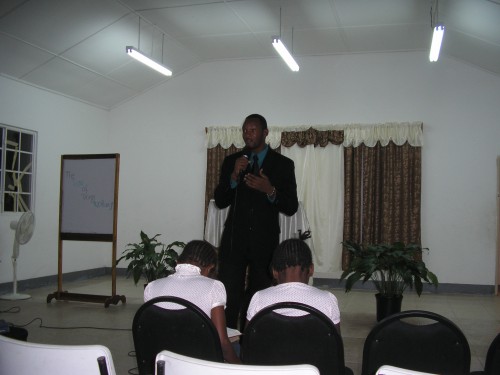 Jevon Barrett appealing to audience to do somethingThe other speakers which presented throughout the weeks of the Gospel meeting were Brothers Robert Solomon, Kemar Blackford and Ean McIntosh.

Other persons from the community of believers expressed same sentiments about the delight at the Gospel Meeting efforts and results.

Masie Cox expressed “I was very exited about our campaign since we haven’t had one in a while. The church needs this to strenghten the members who are there, as well as pulling young in, away from immorality. With God’s help and if life permit am looking 2014 for a bigger and better campaigh. The work of God must go on.”

Ean McIntosh stated “Oh what a feeling to see people cry when they heard the word of God being preached and the look on their faces when they went into the watery grave of baptism. loved it!”